KANBAN – What is Kanban?

“Kan Ban” itself means nothing more than “card”, “document”, “sign”.

Originally the Kanban principle was developed by Taiichi Ohno in the Toyota Motor Corporation in 1947.

The aim was to increase the productivity and efficiency in the purpose of having more advantages against the competitors. By using “Kanban” Toyota was able to control the production much more flexible and efficient. The result was astounding: increasing productivity as well as reducing of cost intensive inventories of raw material, semi-finished materials and finished products at the same time.

How does Kanban work?

It is a system for controlling the flow of material and the production according to the “pull” principle. So-called self-regulating control circuits are implemented to ensure the material supply. In Kanban, the order for material is driven by consumption, this means only the consumption of the production and logistics process trigger the reorder points. 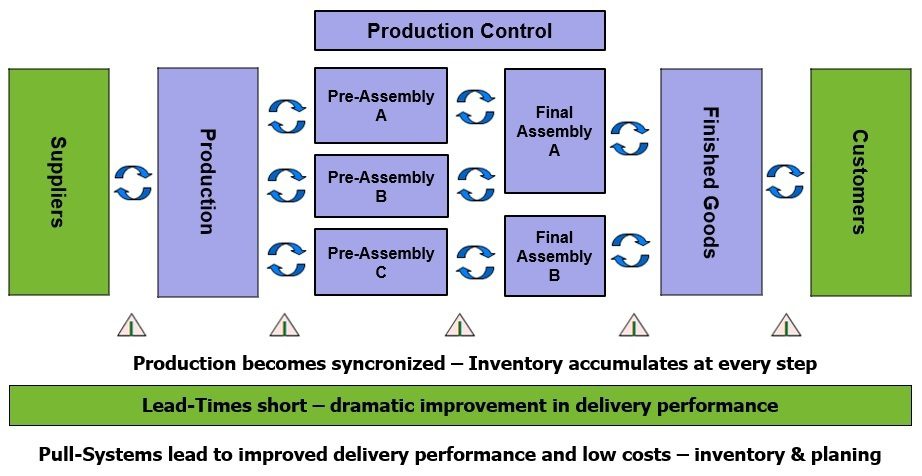 Traditional Kanban systems mostly use Kanban cards to carry information in a circuit in order to control the production process visually. Here, a kanban corresponds to a production order sent to internal or external suppliers.

Which information is displayed on a Kanban card?

All details of the order are described on the card, such as:
• the part number and description
• the number of parts in the container,
• the consumer (sink) and the supplier (source).
Further, the kanban card can include other important information which is stored in the system. 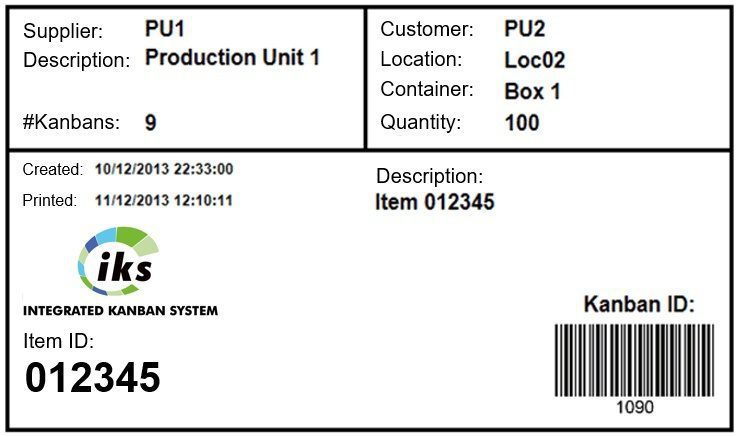 Figure 2: Example of a Kanban card

A Kanban is the smallest unit for each component or assembly. Depending on its needs, replenishment lead time and desired safety stock, the number of required Kanbans can be calculated using a simple formula. As carriers can act grid boxes, pallets, small load carriers, boxes, etc.

If the last part has been removed from a kanban container (in some companies also the first part), then we have kanban signal. Normaly it will be sent in form of a Kanban card (card Kanban) or container with attached map (container Kanban) from the consuming station (sink) to the generating point (source). This creates a cycle, also called Kanban loop. 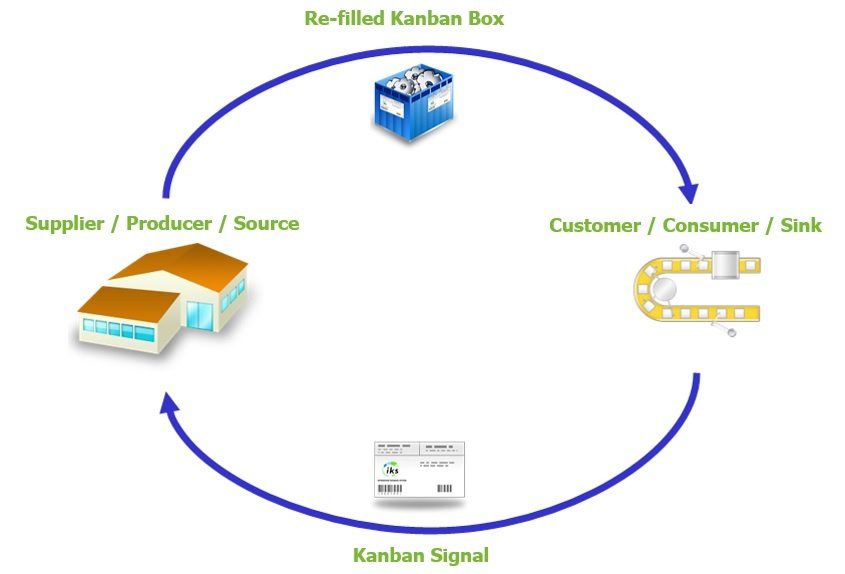 The visualization of the production order is created by the empty container at your premises or via a Kanban board, in which the cards or jobs will be sorted in. If there is no kanban signal, meaning no production order, it will not be produced.

After refilling the defined unit, the “full” Kanban container will be returned to the place of the consumer. Now the parts will be provided in a so-called Kanban supermarket. 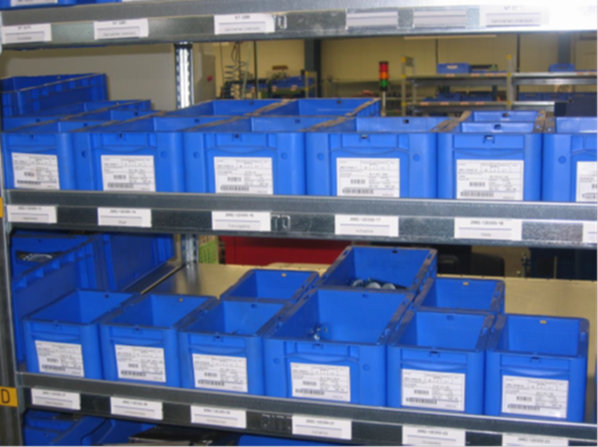 Which types of Kanban exist?

The main advantages of a Kanban system are:
• avoidance of over-production and limitation of stocks,
• higher availability of materials,
• shorter delivery times and higher delivery reliability,
• faster cycle times in production,
• a reduction in planning and control effort
• and thus higher productivity in the areas of purchasing, procurement, planning and control,
• increase of inventory turnover,
• less required storage space.

An excellent example of Kanban in daily life is the refrigerator. There exists products that are being consumed constantly (eg, butter) and things that only exist when needed within a short term range (eg. meat).
The number of pieces of butter depends on the consumption, on the time how long it takes to procure new butter and on the size of the pieces of butter.
This corresponds to the classical Kanban formula:

For example if you assumes that you want to have three pieces of butter constantly available in the refrigerator, then you will, as soon as a piece has been consumed, trigger a signal for replacement (eg, a note on the new shopping list).
Thus you are exactly using the Kanban principle, without ever having called it like that. Other examples from daily life you can find in storing toilet paper, at the pharmacy, in sanitations, hospitals or even in a typical McDonalds restaurant.